What are Surfboard concaves?

Those oh-so subtle differences in the shapes and contours on the underside of your board.

You'll be forgiven for not knowing the first thing about surfboard concaves (90% of surfers don't), so don't beat yourself up about it.  But, if you're one of the rare few that love to know all of the intricacies of surfboard design and how they effect a surfboards performance, then you're in the right place.

Read on to find out everything you could ever want to know about surfboard concaves...

WHAT ARE SURFBOARD CONCAVES?

Surfboard concaves are subtle channels on the bottom of a surfboard.

During the surfboard shaping process, some foam is sanded down further than the ‘rail line’ of the board in order to form these concaves.

This is done for many reasons and can majorly change how a board feels.

Concaves are almost invisible to the untrained eye, but ask an experienced surfer or shaper about them and they'll be able to tell you not only if a board has concaves, but what type of concave and how it affects the board.

Don’t stress though, if you know absolutely nothing about the topic or didn't know concaves even existed until now, you will soon be a surfer who knows exactly what they're looking at when it comes to inspecting surfboard bottoms...

WHAT DO CONCAVES DO ON A SURFBOARD?

There are two main reasons a shaper will add concaves to a surfboard and it is largely to do with increasing the board's bottom surface area and changing the way the water flows through the board.

When you increase the board's surface area, more lift and drive is created.

This is great for advanced surfers who are looking to ride fast down the line and then perform ‘radical’ turns. ur text here...

This is simply the direction the water flows under the board.

For example, a single concave will allow the water to flow directly through the board and flow out the tail. This generates more speed.

On the other hand, a single into double concave will allow for speed when first getting up and riding down the line, but also allow for more ‘lift’ as the water now flows differently at the tail/fins of the board.

If that made no sense at all, see below for a run down of the different types of concaves.

THE DIFFERENT TYPES OF SURFBOARD CONCAVE 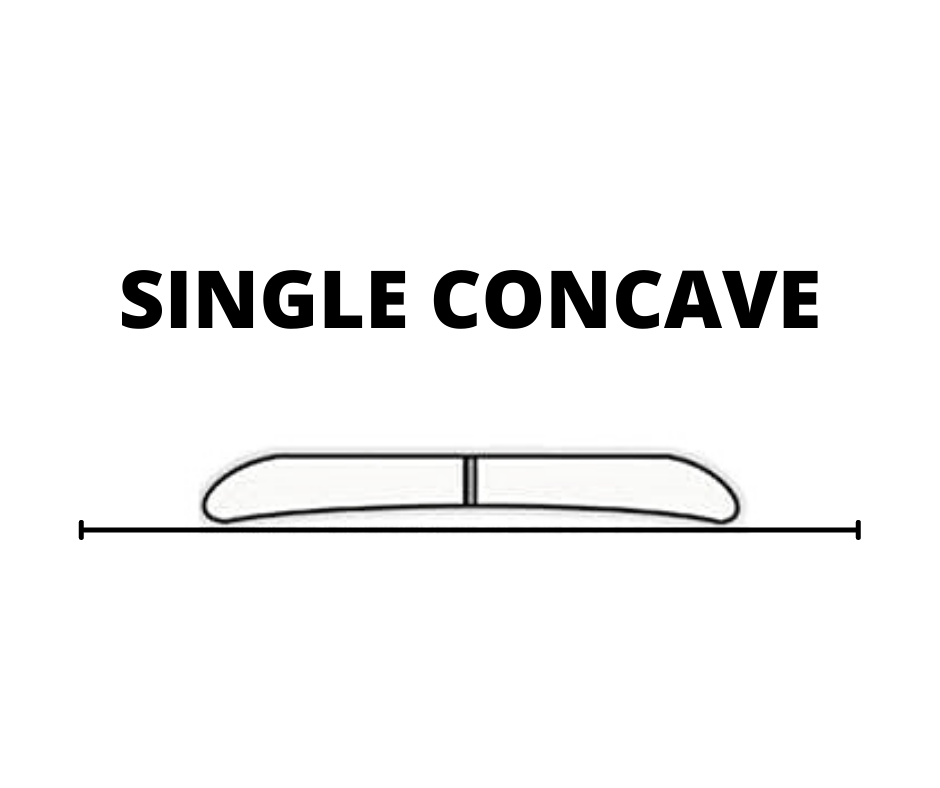 A single concave is a singular contour running almost the length of a board and aims to keep the water flowing nicely underneath the surfboard.

Designed so that water passes under the nose and flows out directly through the fins and tail of the board.

The single concave makes for fast ‘down the line’ surfing and is perfect for big clean waves.

Picture flying down a long groomed wall at 6-8ft Jeffreys Bay, that’s what your single concave was made for.

However, the single concave is not great in messy conditions, as the water no longer flows smoothly underneath the board, instead it becomes stuck and can make the board feel ‘sticky’ when performing turns. 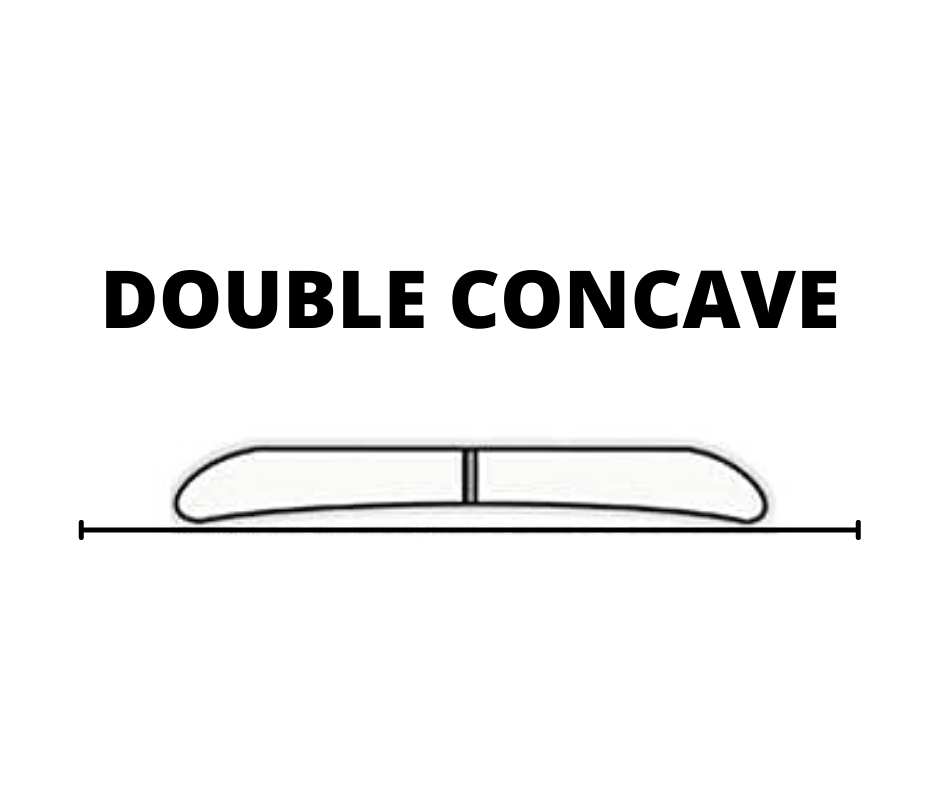 The double concave aims to provide a rider with a ‘loose’ feeling. Allowing a surfer to perform more ‘radical’ and ‘freer’ turns.

The double is often used in combination with a single concave.

It will then merge into the double concave at the back near the fins, so when a surfer is performing a turn, water will be channeled in two different directions, giving the ‘freer’, more maneuverable feeling.

The majority of modern performance boards will use the single to double combo. Having the plaining speed of the single and the looseness of the double, really creates the best of both worlds. 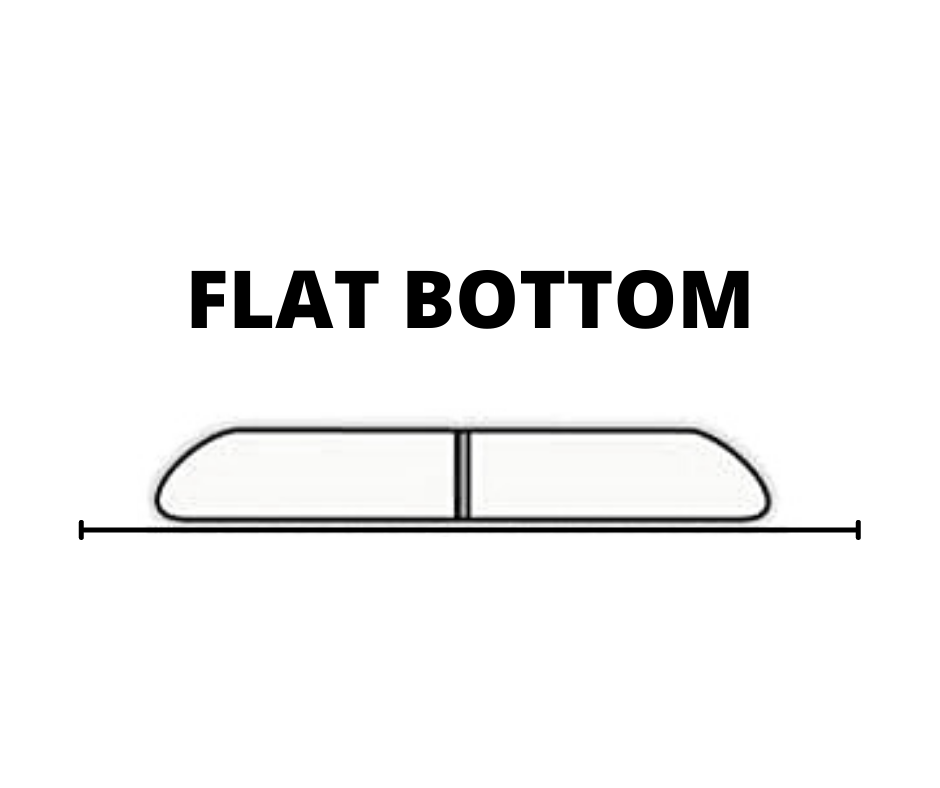 A flat bottomed surfboard is fantastic for beginner surfers and is found on most beginner/soft top boards anyway.

The flat surface means the board can easily plane across the surface of the water, even if the wave is sloppy and doesn't carry much power. This allows a beginner to ride really ‘fat’ weak waves that otherwise wouldn't be surfable.

The flat bottom can also come in extremely handy for the more advanced surfer as it will allow them to go fast and generate speed in mushy/weak surf. Most top level surfers will have 1 or two boards called ‘grovellers’ in their quiver, meaning they can still surf to a high level even in crappy waves. 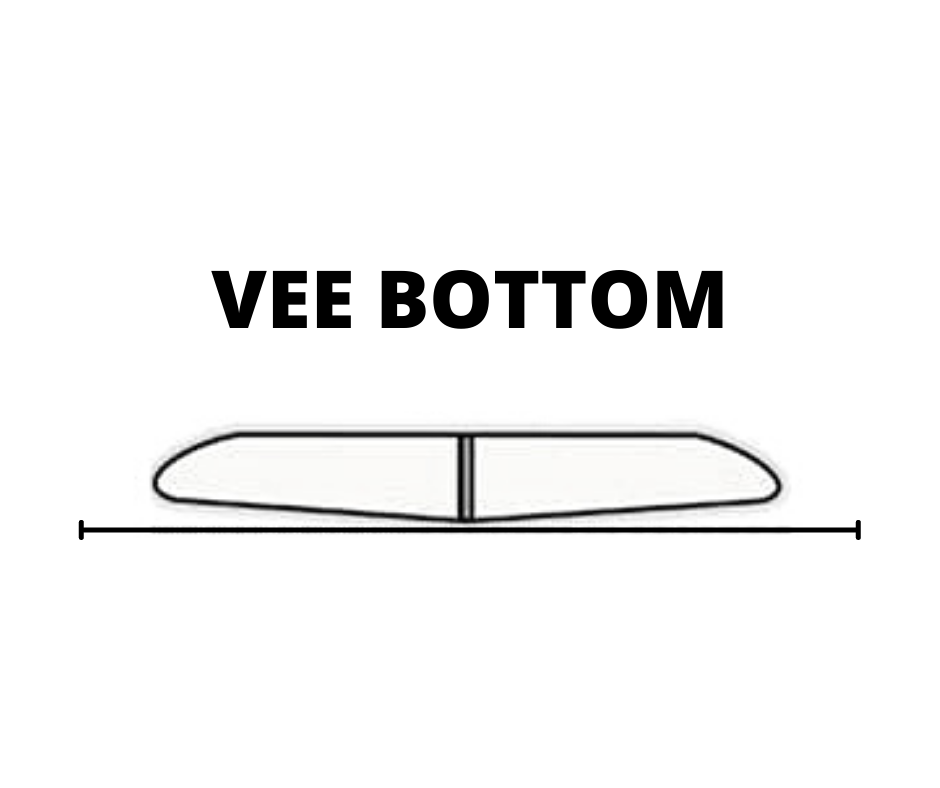 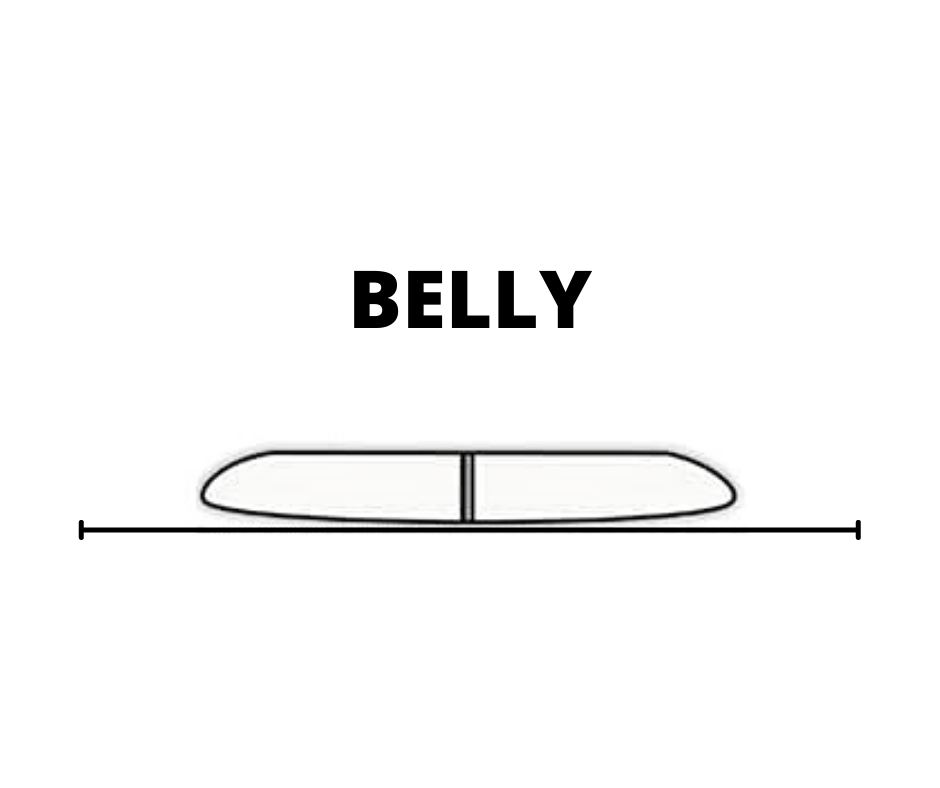 A convex bottom is a surface that sticks out slightly from the bottom, meaning it comes out further than the board's rail line.The vee shape makes it easy for a surfer to go from rail to rail. For example when an advanced surfer is performing a cutback they will be able to transition easily from their inside rail to the outside rail. Although it is great for transitional surfing, a convex bottom will ultimately slow the surfboard down. Any part of the board that sits lower than the rail line in the water is going to cause drag. This drag makes the convex bottom ideal for clean powerful waves that don’t require a surfer to create their own speed.

The single to double is extremely popular with modern performance shortboards.

The single concave near the front allows the board to plane through the water easily when the surfer first stands up and starts to ‘drive’ down the line.

Then, when a surfer is looking to perform a turn, the double concave at the back comes into play and allows the surfer to do a loose radical turn, for example a fins out or reverse.

Sometimes a shaper decides to utilize three different contours in the same board!

Starting with single up front, for planing, double near the back, for more looseness, and then some vee out the tail, just for added maneuverability.

When a shaper is making a board, they will usually have to sacrifice one thing for the other.

Whichever attribute you give a surfboard in it’s concave, you have to take a way from another.

For example, if you want a board that is easy to paddle/catch waves but you want to be able to ride in bigger waves as well, there will have to be some give and take with how much ‘flat’ and ‘single concave’ you add to the board.

A completely flat surfboard that sits exactly atop of the water’s surface.

No concave meaning the board will plain through the water super easily and allow you, whether you’re a beginner or advanced surfer, to ride fat weak waves with speed.

A longboard may have a singular concave up near the nose of the board, which will then move into a ‘belly’ through the middle and then into vee at the tail.

Having concave at the nose creates lift, so when you’re nose riding (hanging 10 or rather trying to like me) it makes things a lot easier.

(Please note, a single concave will not automatically mean you are able to nose ride).

The vee in the tail is going to allow you to turn the board easy when stepping on the tail.

In modern performance boards, the blend of contours is most popular.

As mentioned earlier, a performance shortboard will start with some ‘flat’ just before the nose, allowing you to paddle into waves as easily as possible.

It will then go into a single concave for plaining when you first stand up, then into double for when you're about to turn, before moving into a vee just around the tail for some extra radicalness. 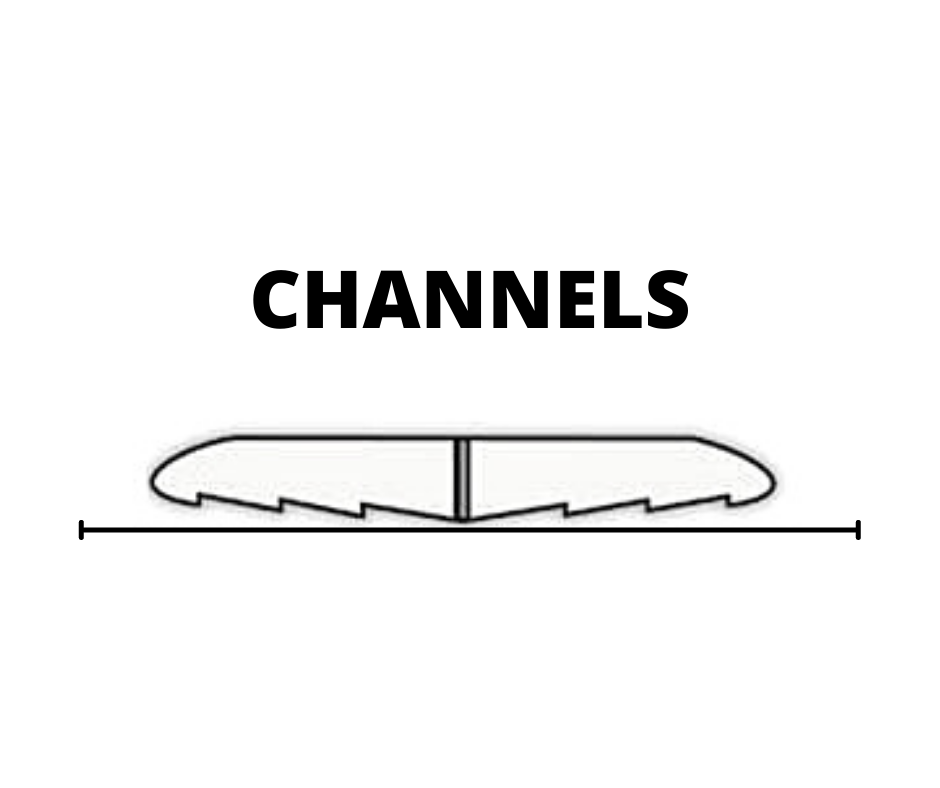 The famous Hawaiian big wave surfer, Greg Noll first shaped channels into the bottom of his surfboard back in 1965.

This was the birth of channel bottoms.

Originally it was belly channels that were popular, when surfboards had large ‘bellies’ which were often slow to ride.

Cutting channels into these bellies when shaping began to increase the speed of the board.

However, due to the introduction of concave bottoms, these belly channels more or less faded out and were replaced entirely by concaves.

WHAT DO SURFBOARD CHANNELS DO?

What Do Channels on a Surfboard Do?

Surfboard channels act much in the same way as concaves, although they’re more drastic and are designed to have greater effect than just a subtle concave.

As mentioned above, tail channels are now super popular in high performance surfboards.

Having deep channels near the board's tail allows water to be directed (in a more concentrated way) through the tail.

When applying back foot pressure over the channels, the board will push back at you, making for better, faster surfing.

This is because the water flowing through the board uses all the extra surface area of the channels to ‘grip’ onto and shoot you forward. So these channels can make for an incredible increase in speed.

Generally speaking - The deeper the channels, the larger the effect.

So there we have it…More or less everything you’ll ever need to know when it comes to surfboard concaves. To be honest, that much information on concoves is probably a little overkill, as I know plenty of very advanced surfers that know absolutely zilch about them. But in my opinion, the more you can know about all different aspects of surfing, is only going to help you improve and progress your wave riding ability.So from here, please use this post as a reference whenever you need to know anything about surfboard concaves.Happy surfing!